Modernize and evolve the code base into an easy-to-change and maintain state. Enable the team to handle large-scale enterprise requirements.

Transforming the organization's code base, processes, and practices during times of rapid growth (from a team of 4-5 people to two teams of 6-7 people) and major team dynamics (changes in key personnel).

Before we joined, Markforged was having more software on their hands than they could handle. Users needed more features, but factors like the old code base, and not enough senior technical members in key teams, made that difficult.

The software was broadly used, but there was a need for more manpower to meet expectations.

Markforged was also about to go public and expected to grow very quickly. They needed something that would increase their software output and increase overall quality. So, a good foundation and readiness for the changes were necessary for the company to stay on top.

When we entered the Eiger Team, we found a small team of 4 (maybe 5) people and a 7-year-old code base, written in CoffeeScript.


What did we do first?

First, we needed to prove ourselves worthy.

You never get a second chance to make a first impression. So, we had to show our full potential, right from the start. The very first thing we've been assigned to do was to implement a feature called Print Backlog.

The goal was to finish that with high quality and in a short amount of time. And that's what we did!

After that, we were in the right position to be proactive. 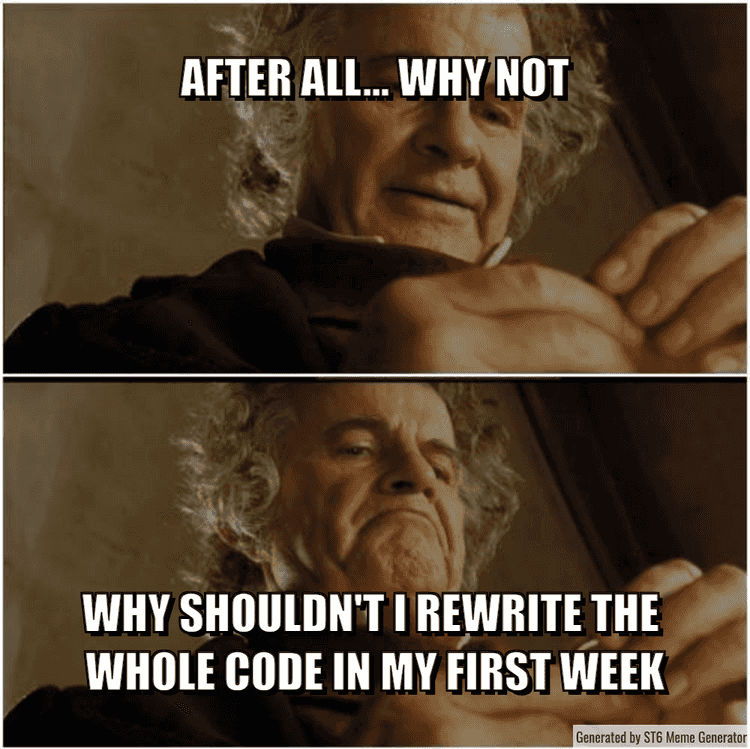 There is an unwritten rule that we believe in: "You don't make major changes in a project in your first day/week/month". We also believe that if you are good enough and you introduce significant changes incrementally, you can win the trust of the team.

And that's what we did! And it was a success. It's why we introduced Jest.

You can't make quality changes without a good testing infrastructure!

Oh yeah, we believe in that!

Markforged was using Karma and Jasmine as their front-end testing frameworks, but they deserved something better. The engineers needed something better! We combined what was already in place with testing library, which was all the rage at that time. Jest was introduced without any friction and it was quickly picked up by all engineers. We even integrated all that with their critical deployment pipelines in CircleCI.

All this was also going to support our next big initiative...

Migrate from AngularJS to React

It's hard to hire someone in 2021, with AngularJS being your primary front-end framework. It's an old framework, nobody chooses it anymore, and it just fades against its successor Angular or React.

Furthermore, AngularJS was facing the end of support. Due to the Covid19 pandemic that got delayed a bit, which was more time for us to execute our approach. But still, a pretty strong incentive by itself to move forward.

That's why we decided to lead the React migration initiative.

How do you do that?

Incrementally! Most people might think that you either use one front-end framework or another. Ideally, yes.

But many projects are more complicated than that and code that has been written for years - well, it works. You don't want to break it. In our case, writing AngularJS (not Angular!) all day was ... let's say it was not ideal for anybody.

So, we based our evolutionary approach on this react2angular library. We kept the application state in AngularJS as is, but started migrating all components bottom-up. From the smallest components to whole pages.

The tricky areas were:

Having decades of experience with many front-end stacks puts us in the right spot to solve these challenges. We had a simple plan to jump-start this migration:

Once we agreed on these rules, we produced the first POC PRs. From there, it was smooth sailing.

This is always a fun one.

Almost all of the code base was written in pure JavaScipt. Well, to be accurate, it was CoffeeScript. Which, in 2021... just got in your way. With ES6, you just don't need CoffeeScript.

But there was a desire to use TypeScript instead.

Just rewriting the whole code in TypeScript wasn't going to fly. Also, part of Markforged was still learning TypeScript. There had to be a good reason to go that path. Even just for new functionality.

Since there wasn't, we proposed that we don't go with TypeScript. At least for now.

Migrating from AngularJS to React was a big initiative all by itself. Combine that with a JS to TS migration, and you wouldn't have gotten new features any time soon. Even if you did that just for the back end. We had to cut this one off.

To be honest, we were pretty happy with pure JavaScript with high test coverage. That's what our React code ended with.

With the front-end framework migration and test automation increase initiatives set in motion, key features still had to be developed and delivered. Markforged was already convinced that ST6 was up to the task and would deliver more than expected.

Most desired by users

In the end, that's what we aim for! We can always just get the job done. But it's far more valuable when we share our knowledge, expertise and vision with everyone else. Every team member, including managers.

That's why we also talk openly about our culture and manifest it in everything we do.

Here are some highlights that Markforged shared about the way we craft software:

ST6 was instrumental in delivering key features for our product and platform during the time of their engagement - notably Overrides, Offline Eiger, Subscriptions, Webpack, React, among others. Each engineer had a positive contribution to our process, culture, and developing our team. The team was easy to work with, took assignments willingly and frequently volunteered their attention to tasks that might not be all that glamorous. ST6 paid attention to our domain and asked questions about our customers and how they use our products to better solve problems. It was not found that tickets had to be exceedingly exact for a solution to be simply implemented but rather they were able to solve problems.

Do YOU need help with transforming your code base and processes?

Reach out to us through our Contacts page so we could talk. Cheers!